The fun thing about photography is that you can create pretty much any sort of image, without the need to do it in post-processing. I went out last Sunday to a local village at Odstock, to see the water flow at great speed. It has a small dip which creates fast-flowing water. This post is all about motion blur and how it can be achieved with a camera or an iPhone (I am not familiar with other phone types, but I'm sure they can also achieve motion blur)......

Motion blur comes as a result of slowing the shutter speed down, to blur a moving image to create an effect, for example, a flowing river can have a frozen, misty look when the shutter speed is slowed right down to get the required look. You are able to create all sorts of images, such as light trails (I will cover this in a later blog), cloud movement, or if you pan, you can give the element of high speed. For now, though, we will look at slowing down water and moving vehicles...... 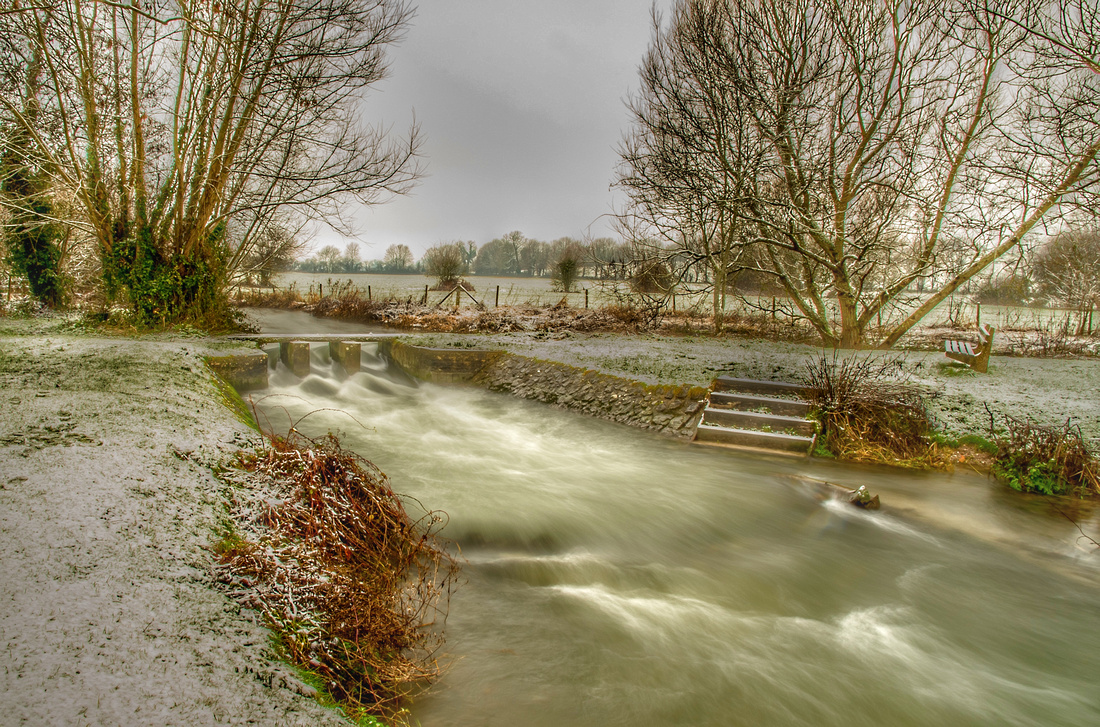 This image was created with the Nikon D500. It was mounted on a tripod and I used my 16 - 85mm lens. I also had a variable polarising filter on, allowing me to darken the scene a bit more.

So to create this look, Set the camera up on a tripod and compose the image as normal, set it up so you have everything you want in the scene. I was intending to photograph this scene on Sunday and was even more elated to find that it had snowed, which allowed for an even more wintery feel to the scene (I was expecting frost at the time). I have live view on my camera, so used this to help me compose the image I was looking for. I adjusted the filter so it darkened down the view through the lens more. This allowed me to shoot at more of a slower speed, which enabled me to slow the water down enough to create a milky look.

Once I had set the view up, I went on to set the settings to shoot the scene. I used manual mode, the lowest ISO I could get, a mid-range aperture setting, and a shutter speed of 2 seconds to start with. From here on it was all down to trial and error in getting the image I was looking for. I took around 30 images, all in RAW for maximum information. As you can see from the settings under the image, I ended up using an aperture setting of f/22. I wouldn't usually use a setting of this size, however, due to the amount of light around, It was the only setting I could adjust sufficiently to allow for a 2-second shutter speed, without overexposing the image. I then processed the image in Photoshop express. ND filters are a good extra to have as they reduce the light by stopping down the amount getting through to the sensor......

The following image, below, was taken at Baker Street underground station. I used the iPhone XS Max, and the third party app, ProCam, under the slow shutter setting. This still allowed me to shoot by manually setting the parameters, and the slow shutter setting allowed for long exposure photography, which couldn't be done under the normal Photo setting of the app.....It does sound complicated, but once you see the options on the app, it will become perfectly clear... I used the timer to ensure the camera was as still as possible when the image was taken. You can either use the earphones as a trigger or get a remote control compatible with the phone. Either way, try not to touch the equipment otherwise you will create further blurring that you potentially don't want. 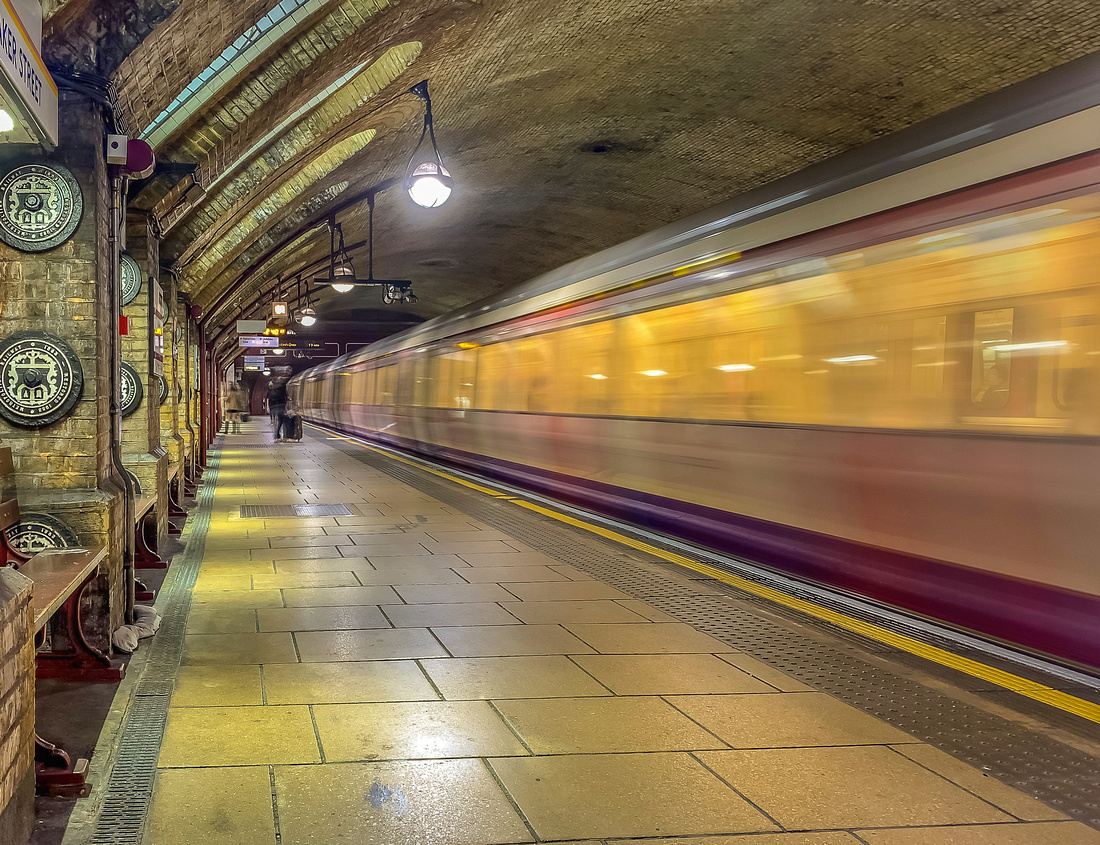 And for the third image, this was a completely different approach. This image was taken with the normal iPhone camera and app, the iPhone 11 Pro Max, in 'live' mode, which takes a second of motion, that can be played back. As a result of this, Apple has included various processing modes that can create 'effects' from the moving image. This image was created using the Long Exposure setting, which in turn created the image below. Be warned though, when using this process, there is an element of cropping automatically done by the phone, so when taking the image in this way, ensure you capture plenty of the scene to allow for any cropping that may automatically be done.

As you can see from the settings, a tripod was not needed for this image. 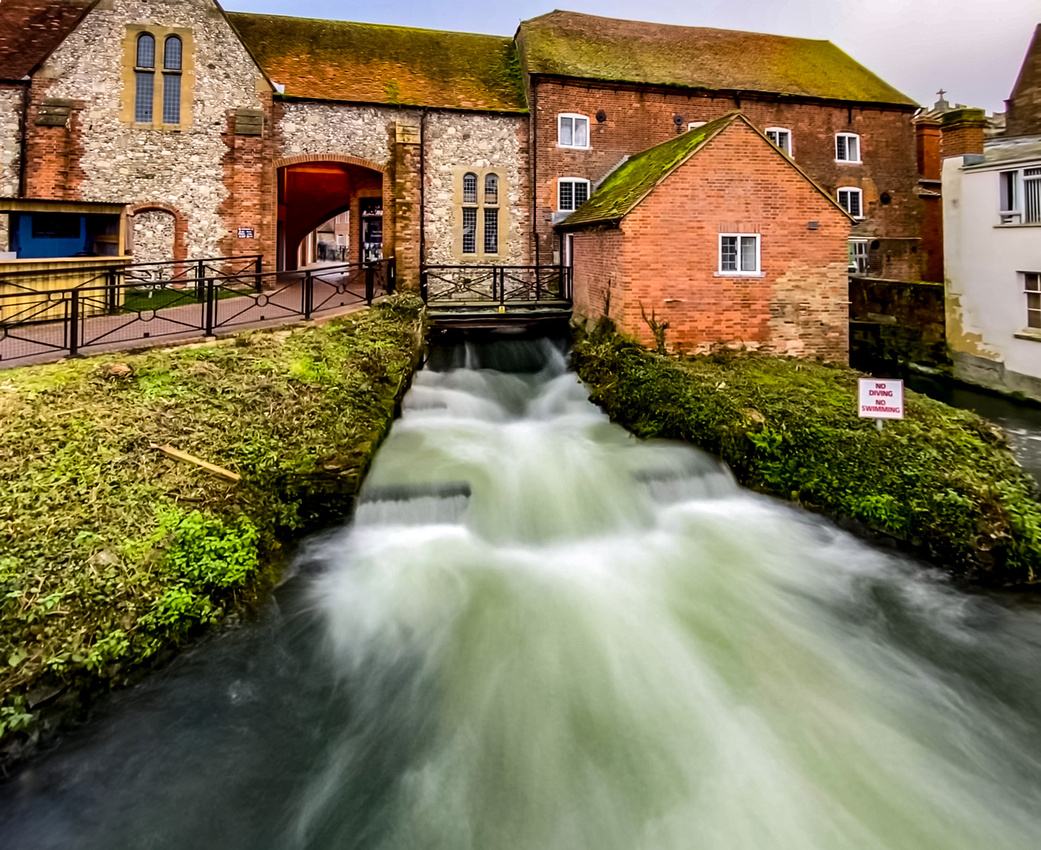 So, to conclude, motion blur can be achieved by using any type of camera. I have shared two types of cameras that can achieve this, using 3 different methods. If you want to achieve an even softer look to the water or train then you simply slow the shutter speed even more, but you must remember to balance the other settings out, otherwise, you will find that you overexpose the image, and be unable to 'rescue' it satisfactorily in post-processing.

Latessa(non-registered)
Love your work and showing me how you do it all, amazing photos, and some classy pictures,Thank you for sharing with everyone x
No comments posted.
Loading...
Subscribe
RSS
Recent Posts
Reflecting - A surreal start to the year Motion Blur Camera equipment - what I use Composition - How to compose an image The start of my journey in 2019 What a journey this year is for me......... A cold winters day walk January 28th, 2018 - Pensive The Journey Continues..... Happy New Year 2018
Keywords
DSLR Nikon camera iPhone Lens London RAW composition framing horizon.
Archive
January February March April May June July August September October November December
© Antony Topham Photography
User Agreement
Cancel
Continue